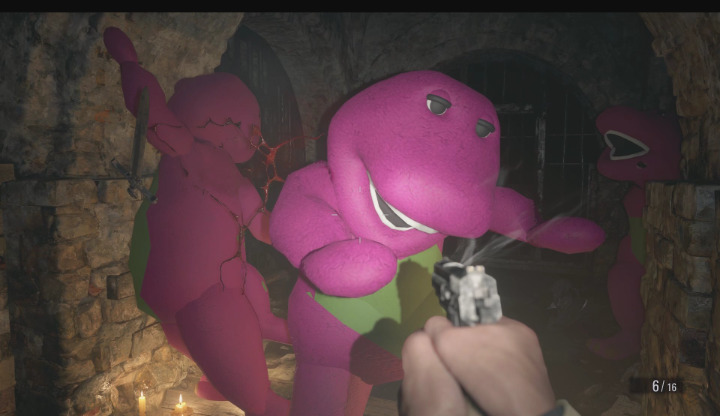 We’re still a few days away from Capcom unleashing Resident Evil Village onto the world, but that hasn’t stopped some intrepid (not to mention creative) members of the community from digging into and modifying the game’s codebase. In case you’ve forgotten, Village‘s final playable demo went live a few days ago, allowing folks to spend a full hour exploring both the titular town (which seems to have been invaded by werewolves) and Castle Dimitrescu, home to the tall, full-bodied countess and her three bloodthirsty daughters.

Admittedly, the demo only offers a brief glimpse at what’s to come, but some technical savvy fans out there took the opportunity to crack open the game’s files and start modding things to their heart’s content. The results? Well, for starters, someone’s replaced the zombified maidens stuck in Castle Dimitrescu’s dungeon with Barney the Dinosaur. Yep, you read that correctly, and you can check it out below.

It gets even weirder, though. Marcos RC, the same modder who’s responsible for the purple dinosaur monstrosity seen above, also went ahead and replaced the maidens with Ricardo Milos, a Brazilian adult/erotic model who became well known for sharing dance videos online (check it out here). Another mod, meanwhile, which can be downloaded for yourself over on NexusMods, swaps the in-game gun and knife for a banana and spoon. Thankfully, these replacements are just as viable as weapons.

If you’re not that amused by these silly changes, you’ll be glad to know that others are working on modifying the game to produce some rather substantial gameplay tweaks. It’s still early days but, as Polygon reports, a third-person camera mod is already being developed, and we wouldn’t be surprised if it’s fully functional just in time for Resident Evil Village‘s May 7th launch.

Continue Reading
You may also like...
Related Topics:Resident Evil

3 Great Games Are Now Free For PlayStation Plus Members