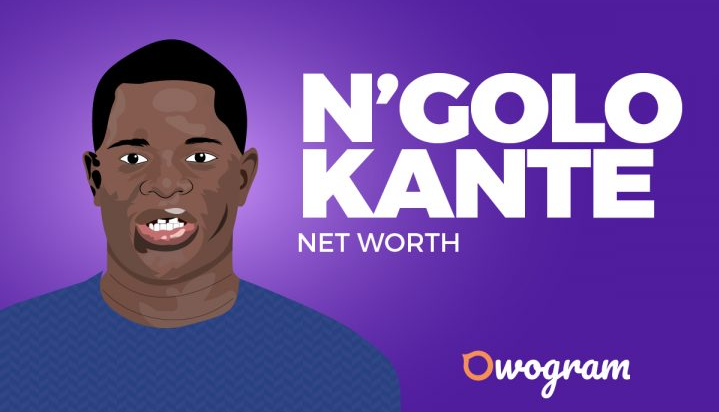 What is N’Golo Kanté net worth?

N’Golo Kanté is a French professional footballer who plays for the France national team and as a defensive midfielder for Premier League club Chelsea.

He is known for his clean tackles, stamina and ability to cover long distances as well as his ability to win back the ball.

This article gets you informed about N’Golo Kanté net worth, biography, club career and other notable achievements.

N’Golo Kanté Net Worth and Highlights

As of today, Kante is worth an estimated $16 million. Here are some of his best career highlights below.

N’Golo Kanté was born on March 29, 1991, in Paris, France, to Malian parents who migrated from Mali to France to have a better life. He is named after King Ngolo Diarra of the Bamana Empire.

He was born in a Muslim family and grew up in a small flat in Rueil Malmaison, a small and densely populated area to Paris.

At a tender age of 11, he lost his dad. He had the sense of responsibility from that age being the eldest of siblings.

He then started working as a trash picker, he would walk for kilometres around the suburbs of eastern Paris looking for all sort of valuable waste and garbage to pick and dispose to small recycling firms for quick cash.

N’Golo Kante knew recycling of garbage wasn’t going to sustain his family, then he looked for other opportunities to make more money, he aspired to become a footballer just like some of those African migrant heroes in the France National Team.

He has been playing football right from his early childhood. He started his youth career with JS Surenes.

He joined the reserve team of Boulogne through the contacts of Suresnes’ president in 2010 and then made his professional debut in the last game of the Ligue 2 season on 18th May, 2012.

He later joined Ligue 2 side ‘Caen’ in 2013 and then played all 38 games in his first season as they came third in Ligue 2 which earned them promotion to Ligue 1.

On August 3, 2015, he joined Leicester on a four-year contract for an unrevealed fee reported to worth €8 million (₤5.6 million).

He scored his first Premier League goal in a 2 – 1 home win against Watford on November 7 and then was identified as the successor to Esteban Cambiasso.

On 16th July, 2016, N’Golo Kanté signed five-year contract for Chelsea for a reported fee of ₤32 million. He was given the number 7 shirt that was left vacant since the exit of Ramires in January 2016.

On December 26, 2016, Kante was named as the world’s sixth best footballer of 2016 by L’Equipe. On 13th March, 2017, he was named man of the match scoring the only goal in the 51st minute in an FA Cup quarter-final win over Manchester United at Stamford Bridge.

On April 20, he was named in the PFA Team of the Year for the consecutive season. Interestingly, he has won several other awards to his credit.

N’Golo Kanté is one footballer that is known at home and abroad. He has also contributed greatly to his country, France.

Kante was selected for the France senior squad for the first time to face the Netherlands and Russia in friendlies in March 2016.

On March 29, his birthday, he made his first start and scored to open a 4 – 2 win over Russia at the State de France.

In June, he appeared in his first competitive match for France against Romania; he made the most passes, tackles, interceptions, covered the most distance on the pitch and also assisted Dimitri Payet’s winning goal in a 2 – 1 victory.

As a current Chelsea player, he receives an annual salary of ₤7,800,000 and ₤150,000 per week. Earning ₤7.8 million every year for his 5-year contract with Chelsea, N’Golo Kanté net worth will surely rise to the apex.

Chelsea F.C, is one of the great clubs in one of the most valuable football leagues in the world.

How Kanté Spends His Money

Considering N’Golo Kanté net worth, it is also important to know how he spends his money.

The loveable Frenchman is known to be humble as ever which has reflected in the car he drives. He said to his coach: “I want to run to training every day and run back home after training”.

Although having signed a five-year contract to become one of Chelsea’s highest-paid players, it almost certainly hasn’t gone to his head. Still, Kante isn’t on the list of the highest paid players in the English Premier League.

He rocks a Mini Cooper S as his preference. He also owns Mercedes Benz-GLS which is worth $70,545.

N’Golo Kanté takes full responsibility of paying his tax. He is one of the few footballers who despite the club’s offer chooses to pay his taxes direct.

In one of N’golo Kante’s quotes and sayings; he once admitted: “To be honest, it was only when I was first in the French Ligue 1 that my manager and other people started to say, ‘Okay, N’Golo recovers a lot of balls.’ Before that, I didn’t consider it to be my job in the team.” – N’Golo Kanté

N’Golo Kanté is one footballer that is loved by all, even rival fans love him. He is known for his humility and his habit of wanting to do what an average person does. For this reason, he is loved by all and sundry.

N’Golo Kanté takes full responsibility of paying his taxes. He pays his full share of tax having rejected Chelsea’s suggestion for him to be paid through an offshore company.

This is one of the greatest examples one can emulate from N’Golo Kanté. This is a testament of an absolute gem of a person he is.

One of the greatest responsibilities of every human is to be grateful. Kante seems genuinely appreciative of what he has got which explains why he is always smiling.

He made it clear that a lot of people seek the position you’re grudging about, and for you to have it is such a great privilege. Be appreciative.

Summary of N’Golo Kanté Net Worth

N’Golo Kanté is one of the best defensive midfielders in the world and his market value can obviously show for that.

Being one of Chelsea’s highest-paid players and one of the top-earning sportsmen in the world, N’Golo Kanté net worth cannot be overestimated.

Continue Reading
You may also like...
Related Topics:Biography, N’Golo Kanté, Net Worth

Oxlade Net Worth and Biography
To Top