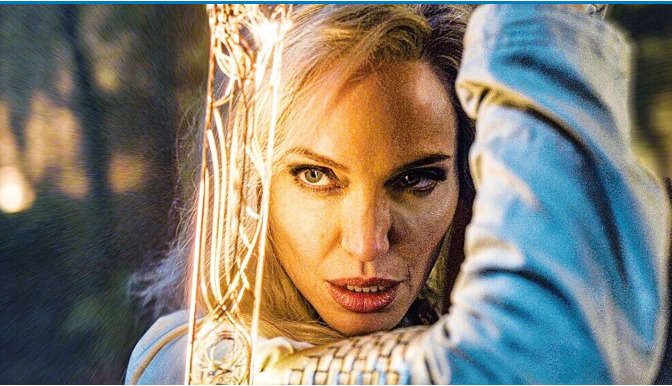 It’s always a source of internal embarrassment for the crew behind any project when a member of the team inadvertently finds themselves appearing in the background of a shot, whether it’s a cameraman or boom operator. And usually, the fans love to jump on these goofs and give them a life of their own, as we’ve seen when The Mandalorian‘s Jeans Guy became a cult hero and even got his own character poster, before Lucasfilm swiftly edited him out of the episode in question.

Yesterday saw Marvel Studios drop a sizzle reel for the entire Phase Four lineup, which included new footage from July’s Black Widow and the very first look at Chloe Zhao’s Eternals. The internet went wild at seeing Angelina Jolie, Salma Hayek, Richard Madden and the rest of the gang in action at long last, but as you can see from the reactions below, a lot of folks think they’ve spotted a major goof.

It’s hardly on a par with the infamous coffee cup from Game of Thrones, but the cameraman in the background of the Eternals footage is there for a reason. Within the context of the movie, Kumail Nanjiani’s Kingo is a big name actor, and the blockbuster is even set to incorporate a Bollywood dance number, while in the comics he’s known to have a team following him around and documenting his every move for posterity.

There’s even a dude with a camcorder spotted shortly afterwards when Kingo is in the desert, making it more clear that it’s all intentional. Of course, not a huge number of fans are overly familiar with Eternals and the associated lore, but it just goes to show how quick people are to point out mistakes that they think happened by accident.

Continue Reading
You may also like...
Related Topics:Comicbook.com, Eternals, Vulture.com