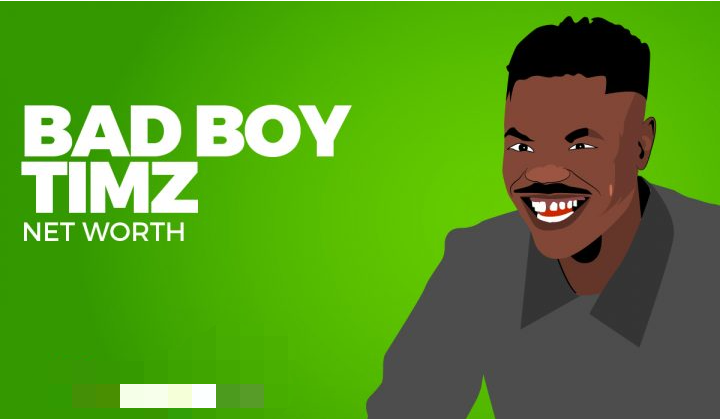 How much is Bad Boy Timz net worth?

Bad Boy Timz needs no introduction as he is one of the breakout music artists in 2021.

He became a bang right from the start of his music career, and it became clear that he has so much in him to give to his fans from across Nigeria and probably beyond.

For someone so young who began making waves in the music industry, some fans can’t help but wonder how much Bad Boy Timz net worth is.

This situation is very understandable considering the huge gains which most musicians reap from a few hit song to their name. Though he is not one of the top 10 richest musicians in Nigeria, Bad Boy Timz net worth is a topic of interest.

What makes it more interesting is the fact that he is already a fan favorite, as he commands a huge following on his numerous social media network accounts.

As a result, discussing Bad Boy Timz’s worth is inevitable. This article will enlighten you with the facts and correct details of his net worth, career, early life, and so much more.

As it stands today Bad Boy Timz is worth an estimated $351,000. Here are some of his currentcareer achievements below

Bad Boy Timz is set on a path to greatness. This is due to the many indicators that point to the fact, especially through earning nominations early in his career.

Bad Boy Timz has received a couple of nominations since the official kick-off of his music career.

He was nominated for the ‘Rookie of the Year’ award at the 2020 Headies and for the ‘Next Rated Artiste’ (male category) by City People Music Awards.

These nominations clearly justify his net worth which is outstanding for such a young career.

Olorunyomi Oloruntimilehin known by his stage name as Bad Boy Timz was born on the 13th of August, 1994.

Rumor has it that he originates from Ogun state, but was born and raised in Lagos, one of the 36 states in Nigeria in the southwestern part of Nigeria.

While so little is available about the early stages of his life including his primary and secondary education, he recently graduated from Bells University which is a private tertiary institution in Ogun State.

Though music is currently his major profession, he studied computer engineering for his first degree. Before officially launching his music career, it is safe to assume that Bad Boy Timz net worth is not as significant as what it is today.

According to him, he found love for music since he was young through the choir ministration in his church at the time. This motivated him to make the move to be a part of the group.

It was through this group that his music abilities were amplified through regular singing and training. Before the conclusion of his education at the tertiary level, Bad Boy Timz had already become well known as a superstar musician in the making.

Very few had doubts about his ability to make it in the Nigerian music industry.

Related: Oxlade’s net worth and biography

While studying Computer engineering at Bells University, Bad Boy Timz would always spend his leisure time on music through training, and rehearsals.

He would also attend different shows organized by his university and other neighboring tertiary institutions to showcase his talents and allow his fame to gain traction.

As most successful people would say, consistency is the key to success. Bad Boy Timz net worth wouldn’t have been a topic if he wasn’t very consistent with work on his music, and his big break came sooner than expected.

He went viral on numerous social media platforms subsequent to posting a video cover of the hit song ‘If’ by Davido. Due to his great ability expressed through the cover, many quickly recognized him as one to look forward to in the coming years.

Bad Boy Timz also proceeded to release numerous freestyle videos of songs which he personally wrote and executed. Without a doubt, it was clear to see that he had tremendous talents and confidence in his abilities.

After so much work and investment in his music, Bad Boy Timz released his debut single titled ‘Complete me’.

His work was much appreciated by fans and other people who listened to the song. It also gained much more attention from the audience after the release of the video of the song. This release marked the beginning of a booming Bad Boy Timz net worth.

After the success of his debut single which hit all across Nigeria, Anonymous record label swiftly moved for his signature in a record deal.

As anyone would expect, Bad Boy Timz net worth got a further boost as a result. From then on, all of his music works have been much more appreciated by the general public.

After joining up with the record label, Bad Boy Timz followed up with his debut EP titled Timz EP in 2019 which contained 6 songs that you can download on these top 10 Nigerian music websites.

In the year that followed, he released a hit song titled MJ. This song topped the music charts across all platforms in Nigeria for over a month.

He also released different remix versions of the song, one which featured Mayorkun and the other featured Teniola. The success of this single brought multiple fortunes to Bad Boy Timz net worth on all grounds.

To further highlight how far he has come, he was featured on Olamide’s latest album titled ‘Carpe Diem’, where he made an appearance in the song ‘Loading’. At the time of this writing, Bad Boy Timz net worth is valued at $300,000.

Like many other young and successful music artists, many would expect Bad Boy Timz to live a lavish, luxurious lifestyle.

However, the opposite is the case here. Despite his worth, he lives a quite modest lifestyle. This can be credited to his humble beginnings, as well as the fact that he is just concluding his tertiary education.

In one of our favorite Bad Boy Timz quotes and sayings collection, he once said; “If you put enough time into something, your time is gonna come” – Bad Boy Timz

The current estimated net worth of Bad Boy Timz is definitely something of a shock to many fans who have already established what it amounts to through this post.

This outlines just how lucrative the business of music is in our world today. Clearly, it would be a motivation to many upcoming artists who are looking to explore their options in this industry.

Up till date, Bad Boy Timz has had a rather interesting music career till date. This article has been able to explore different aspects of his career and what we should expect from him in the coming years.

Despite having been applauded for his already great start in music, we can all agree that there is still a lot more to come from the young superstar.

What did you think? Let’s have your comments in the box provided below.

Continue Reading
You may also like...
Related Topics:Bad Boy Timz Net Worth & Biography